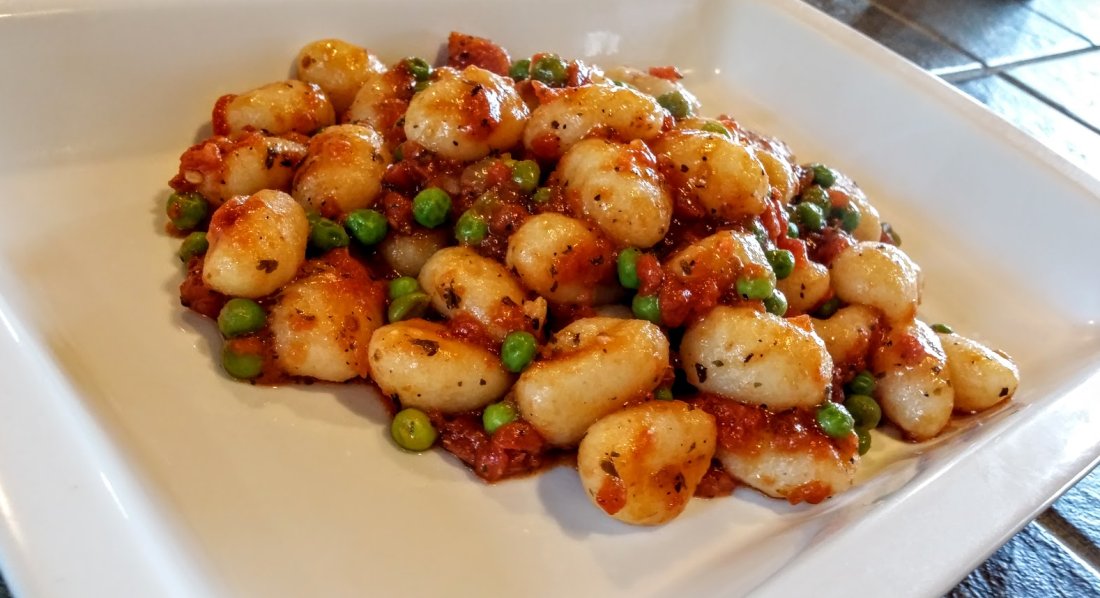 About the cook: A professional chef, but enough about me.

About the dish: Simpler than you think and a real table pleaser.

This recipe requires some conversation. The reason there’s no one right “authentic” gnocchi recipe is that the cooking of these ingredients is too variable. Read the comments anywhere that has a gnocchi recipe and you’ll find someone who completely mangled it after allegedly following the directions precisely, and that person probably did follow them. But, you’re dealing with potatoes and trying to elevate a dish that was probably created to use up leftovers or whatever was available for food in the village at the time to something that’s consistent every time you make it and is the height of culinary excellence. It’s not. Consistent is not how this started out and grew to be a different favorite style for every family. That’s moving backwards.

A recipe might cover what kind of potato, but how big they’re cut or how long they’re at a full boil vs a just-getting-rolling boil or how long they cooled before you start the rest of the process … all of that can mean a minute makes a difference in your water content in the potato. So, you really can’t say exactly how much flour anyone is going to need. Then you’re dealing with flour. Knead it for one minute too long and you have potato bread dough instead of gnocchi. And depending on how much water content and flour, your different sized eggs may or may not be enough for a perfectly consistent binding from one day to the next.

I’m going to do my best, but you might find this recipe annoyingly flexible if you’re someone who insists on precision. The same holds true for the timing. You can do this 10 minutes here and 20 minutes there and have it take all day while you get other stuff done, or you can hunker down and try to do it all at once. On average, you’re going to invest about 2 hours total no matter how you do it. The same holds true for my comments, because they’ll look excessive if you’ve read any of my other recipes where it looks like I generally just throw stuff together and say “That’s good.” Some stuff can be thrown together and you only have to pay real attention to how you cook it. Some stuff is all about the concept. Gnocci is concept, and I am passionate about concepts, so it’s a conversation.

Back to the potatoes. If you want to peel and cut up all your potatoes and then put them through a ricer and make sure they’re still hot when you start working with them because your favorite chef does it that way and you don’t anyone to think you’re not at the top of the pile on technique, fine. If you do it a different way, fine. 87.6% of Italians (I’m guessing) don’t care. In fact if you have a real Italian in your kitchen when you’re making gnocchi and he’s used to watching people make gnocchi, what’s probably going to happen is he’ll look over shoulder when you do something different than he’s used to and say “Questo non è il modo in cui mia madre lo fa, ma va bene.”, which means “That’s not how my mom does it, but fine.” Don’t worry about it. If you want to boil the potatoes whole, fine. Leftover potatoes are fine as long as they’re not mashed potatoes that are saturated with butter and cream. Baked potatoes are fine. Put your eyebrows back down. I’m serious. I’ve been making gnocchi forever and it was a top seller at my restaurant. No matter how I experimented with it at home or at the restaurant, nobody ever said “Something’s up with the gnocchi tonight.” What’s important is the texture you coax out of the potatoes once you’ve got a pile of cooked potatoes, and that’s all about moisture content. You can fuss with it through how you cook or treat the potato, but it’s a little bit of difference compared to the big difference you get out of just making sure your concept is solid.

If you’re going to boil the potatoes, make life easy on yourself. Pierce them with a fork, put them in a pot of cold water whole, bring the water to a boil, turn the burner off and put a lid on, then walk away. Come back and check them until you can easily get a fork through to the center, then drain them and let them cool. This is the simplest way to make sure you get consistent water content in the potatoes every time. If you don’t want to deal with boiling them, bake them and add a little water if you need to for them to be boiled potato consistency before you use them. If you’re using leftovers … well some people should just not use leftovers, but if you’re determined to and believe your leftover potato is pure enough to do this, just don’t use them cold. It effects how everything else reacts together. Hot is not necessary. Warm but easy to handle is good.

Assuming you are not using leftovers, you do not need to peel your beautiful freshly cooked potatoes. You do not need a ricer or a grater. Go ahead if you’d like, this is your dinner. Really. But all you really need is your hands and a fork if they’re fully cooked. Split the potatoes open and scrape everything out of the skins. Go to town on them with the fork until you have a fluffy pile. You don’t want any big chunks left in there, but if you have a few small whole pieces, maybe the size of Arborio rice grains, you’re fine. A few. I’m all about mouth feel variation and think a ricer is a little fussy, but you do want consistency even if you’re being as pedestrian and cavalier about this as I am.

Now comes the fun part. Put the eggs and salt in the potatoes and gentle swirl it all together with your hand. No matter what you’ve got now depending on how you did the potatoes, it’s time to turn it into a silky dough form that you will not knead into bread, no matter how tempting. That’s the important part of this. Throw in a cup of flour and start combining. You’ll probably use about twice that, but add the rest a little at a time with a very non-aggressive, non-hostile, you-are-not-mad-at-these-potatoes-or-taking-out-your-last-argument-with-your-boss-on-them folding with your hand. Gnocchi is not therapy dough like bread dough can be. Be gentle or your little dumplings are going to be just as hard on you as you were on them. You’re going to do this until your mixture is just dry enough to pick up and roll on the counter without being sticky. It should still be loose enough in this big blob form to not really hold its shape, but not break apart or feel wet. You’re going to be working the dough a little more as you roll it out and the flour’s going to continue to soak up a little moisture since you haven’t kneaded this for a long time like bread dough, so soft is fine.

If you want picture perfect gnocchi, start rolling the dough into one inch balls and then give them a little indentation on the top with a fork, pressing them down to oblong shapes instead of spheres. That’s as pictured, though I’m not fussy about deep indentations. If you just want to get this stuff on a plate as fast as possible at this point because you’re sick to death of talking about potatoes, roll the dough out in long tubes of about a half inch to an inch thick and cut them into one inch pieces. It doesn’t matter. At this point, if you’ve got the dough texture right they’re going to rise in the water when they’re cooked through to the center no matter what shape they are or whether or not they vary in size a little.

Into boiling water they go. When all of them have popped up to the top, they’re done. Do not start pulling out each one when it rises. Do not walk away from them and think an extra couple of minutes never hurt a dumpling, because you’ll be turning them into southern style dumplings. I love southern style dumplings, but they’re not gnocchi. When the whole batch rises, the whole batch is done. Floating is gloating. “I’m done, coach! Pull me out!”

For the sauce, I’m going to repeat something from another recipe. Marinara is intended to be a fresh sauce. It generally doesn’t need more than about 20 minutes of cooking time or you lose the fresh tomato flavor that makes it marinara. A crushed clove of garlic, two or three tablespoons of olive oil, basil, salt and pepper to taste and 28 oz can of crushed tomatoes will quickly yield the 3 cups of marinara called for if you don’t keep it on hand. My preference is about 10 or 15 minutes at a simmer, so you’re looking at 20 minutes total to toss the garlic around in the olive oil for a minute, put the rest in there and end up with a great sauce for your gnocchi. Use whatever tomato sauce recipe you want, but with gnocchi I think simple is best.

Finally, the peas. Pretty, right? Also a ridiculous way to make you think you’re adding a vegetable. Totally not worth the time it takes to shell and make fresh peas because, let’s face it, we don’t care about the peas. We want them to be nice and taste fresh, but they’re an add on. Open a bag of frozen peas (if you open a can, you are not allowed to read any of my recipes ever again) and very gently put them and the gnocchi in with your marinara, stir, plate, die happy.