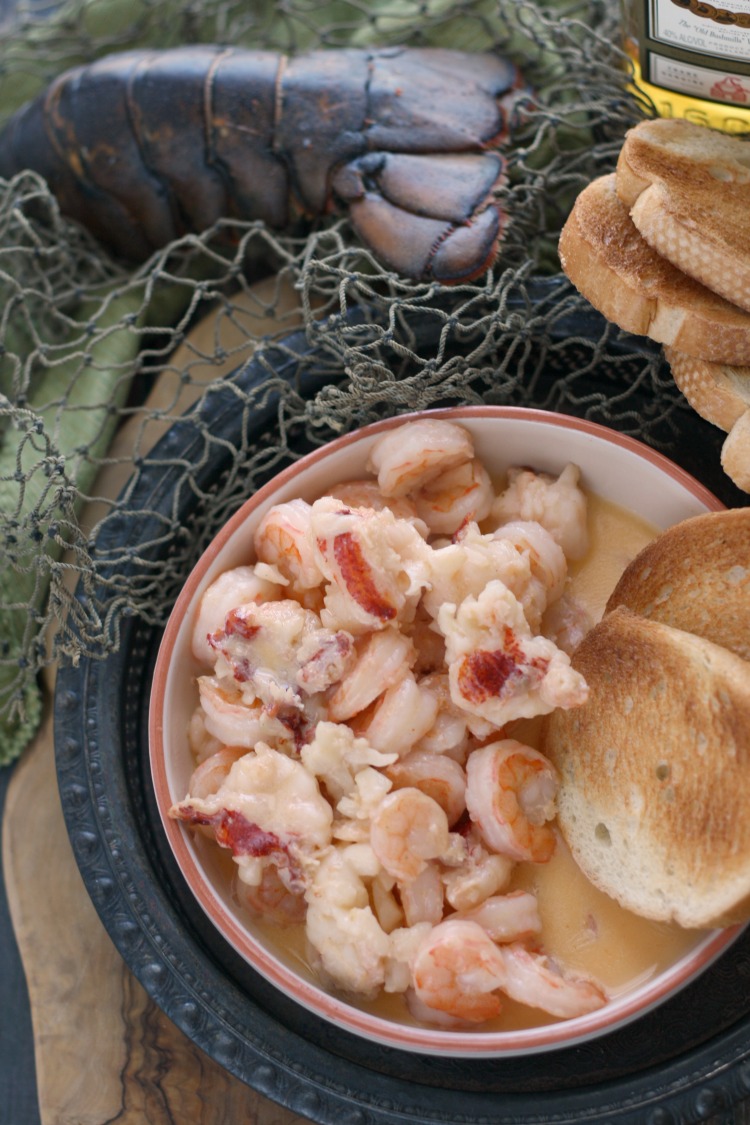 About the cook: I am a trained chef who spent 15-plus years in the industry and a home chef since I could lift a spoon. I've had a passion for cooking that I truly never discovered until later in life, but the fire was always there. In college for journalism, while everyone else was ordering pizza, I was making chicken and cheddar/broccoli rice. I'm determined to cultivate this passion, absorb as much as possible and pass it on to the next generation.

About the dish: My mother grew up poor in Ireland, but made a success of herself here in the USA. I decided to create an amalgam of an Irish peasant dish and a high-end Irish dish: Dublin Lawyer with Champ.

NOTE: The key to this dish is timing; you want everything to basically be done at the same time. My suggestion is to once you add the lobsters to their boil, begin the boil for the potatoes. Once the lobsters are cooked and drained, add the potatoes to their boil. By the time you’re done cleaning the lobsters and finishing the Dublin Lawyer sauté, you can begin to make the Champ. By the time the Champ is mixed, the sauté should be ready and you can begin to plate.

Dublin Lawyer:
-Bring water to a boil in a large pot. Once boiling, add lobsters and cook for 7 – 10 minutes until lobsters are bright red. Drain and cool under cold water.
-Deconstruct the lobsters, saving the claw and tail meat. There is some meat in the smaller legs, but removing the meat can be time-consuming, and time is of the essence in this recipe. Feel free to save them for meat removal at a later time.
-Cut the meat into medium-size chunks.
-In a large saucepan, cook the butter over medium heat until slightly foaming. Add the lobster and cook until just slightly done.
-Pour the whiskey over the lobster and light it on fire, preferably with a long necked lighter. The whiskey will ignite quickly and suddenly so be very careful.
-Once the flames have died down, add the cream, lemon juice and mustard and combine. Stir in the salt and black pepper and reduce heat to low while plating.

Champ:
-Bring a large pot of water to a boil, adding the salt. Add potatoes and cook for 15-20 minutes until tender. Drain and rinse.
-Set aside 2 tbsps of the scallions for plating.
-In a large mixing bowl, add potatoes, cream, butter, scallions and salt and mash together until consistent.

Plating:
-Put out four clean plates.
-Take a plastic pint container and cut off the bottom. You can also use a round cookie cutter, but will have to stack the molds two or three times to get the right height. Lightly grease the inside of the mold.
-Wearing disposable rubber gloves, tightly pack the Champ into mold. On each serving plate, place the mold and gently remove, leaving a tower of Champ.
-With a large serving spoon, spoon the Dublin Lawyer over the Champ, starting in the center and working out. Garnish with remaining scallions.