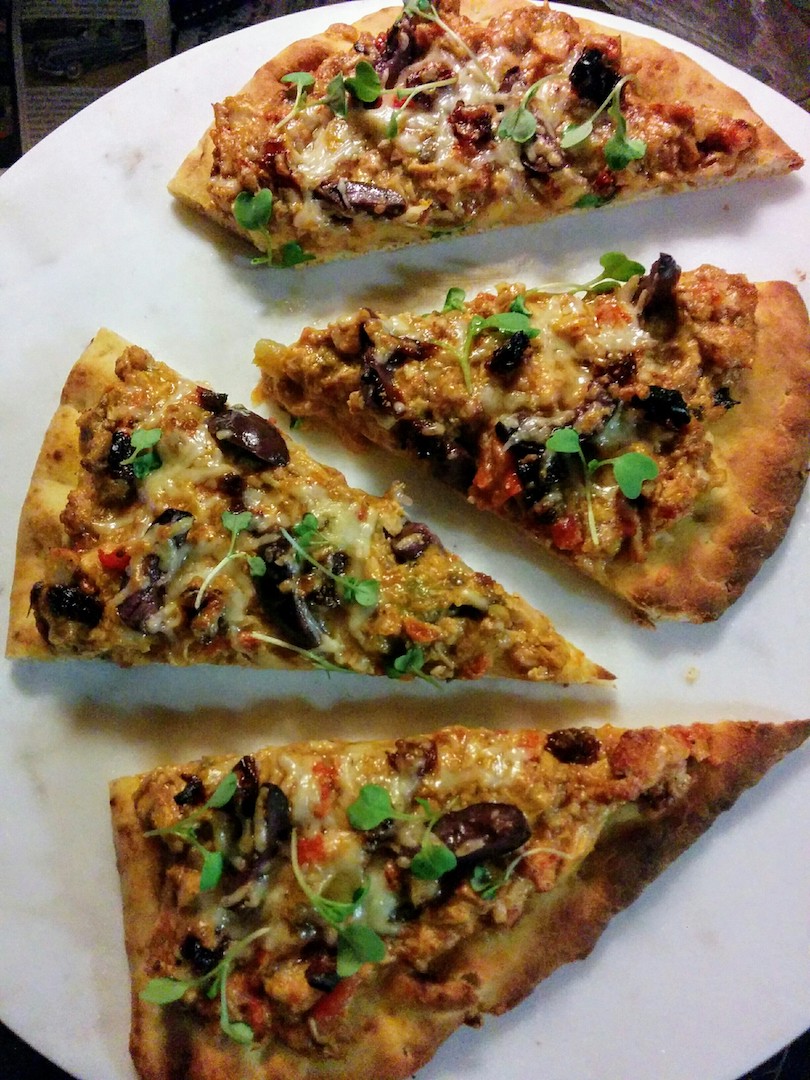 About the cook: A competition cook since 2010, Jodi has won many contests including The California Strawberry Festival, The Gilroy Garlic Festival, The California Bacon Championships and Cutthroat Kitchen. Even in her work as a professional actor, Jodi can't seem to keep out of the kitchen. On The Disney Channel's show Shake It Up, she was known as The Meatball Lady and currently appears as the Home Ec. teacher on K.C. Undercover on the same network.

About the dish: Individual pizzas with a twist, using garlic naan bread, chicken and a host of yummy veggies.

1. Pre-heat oven to 425 degrees.
2. Rub chicken with olive oil, 2 teaspoons salt & 1 teaspoon pepper, and bake on a parchment lined sheet pan 1 hour or until juices run clear. Set aside to cool. (Don’t turn off the oven yet)
3. While chicken is cooking, dice the peppers & onion.
4. When chicken is done, use the rendered chicken fat to cook the peppers and onion in a saucepan set over medium heat until soft. Season with 1 teaspoon salt and 1/2 teaspoon pepper.
5. Lower the heat to medium and add the can of petite diced tomatoes. Cook uncovered 15 minutes. Then remove from the heat.
6. While sauce cools a bit, remove the skin from the chicken and discard. Cut chicken into small cubes and add to the sauce.
7. Fold in the Picatta Sauce and the remaining salt and pepper.
8. Spread 1/2 teaspoon garlic on each Naan and place in the oven for 5 minutes.
9. Remove naan from oven and spread chicken sauce evenly over each, leaving about 1/4 inch border all around.
10. Remove pits from olives and slice thickly. Top each naan with equal amounts of olive slices.
11. Finely chop roasted bell peppers & capers and evenly distribute over each naan.
12. Sprinkle each naan with1 tablespoon shredded parmesan cheese and place in the (still hot) oven for 12-15 minutes, or until cheese has melted and edges of naan are crunchy.
13. Garnish with fresh micro arugula, slice and enjoy!