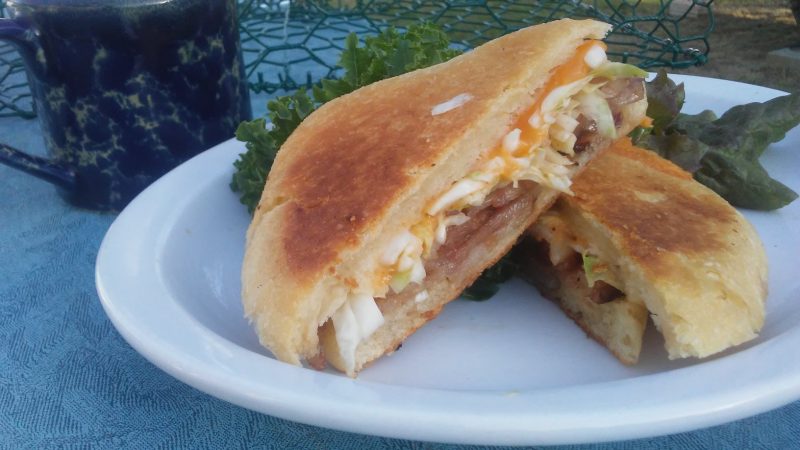 About the cook: David Hill is retired and lives in an old RV in coastal North Carolina.

1. To make Spicy Cabbage Slaw, in a large mixing bowl stir together the white vinegar, half (3 tablespoons) of the brown sugar, salt, and Cayenne pepper. Shred the cabbage finely, put it in the bowl, and toss the cabbage with the dressing. Set aside for a half hour, turning the slaw one or twice so that the cabbage will marinate evenly.
2. To make Bourbon Glazed Jowl Bacon, cook the strips in a large heavy skillet over medium-low heat, pouring off the rendered fat, until the strips are done to your preference. Save some of the drippings for later. You should have about a pound of meat after the fat is cooked off.
3. Pour off any remaining fat. Turn the heat down to low. Sprinkle the strips with the remaining brown sugar. Then take the pan off the fire, add the bourbon, and carefully ignite the liquor with a match. When the alcohol has burned off, return the pan to the fire. Cook the bacon another five minutes, gently turning the strips, until most of the liquid has cooked away and the bacon has a nice glaze.
4. Place the strips on a foil sheet, cover loosely with foil, and keep warm until needed.
5. Slice the sharp Cheddar thinly. Cut each Ciabatta roll open and butter the interior.
6. To assemble the sandwiches, first layer the bottom half of a roll with glazed bacon (about 3 or 4 ounces per sandwich). Scoop up some of the slaw, about ½ cup per sandwich, squeeze it to remove extra dressing, and press the slaw on top of the jowl. Then layer the slaw with a couple slices of cheddar, about 2 ounces per sandwich. Finally top the sandwich with the upper half of the roll.
7. To cook the sandwiches, grease a large pan or griddle with some of the fat reserved from cooking the bacon. Set the heat to medium low and arrange the sandwiches on the griddle or in the pan. Weigh down the sandwiches with a grill block. Cook the sandwiches, turning them once or twice, until the cheese is melted and the rolls are toasted. They should be compact but not squished flat by the pressing.
8. Slice the sandwiches in half on the diagonal and serve piping hot.