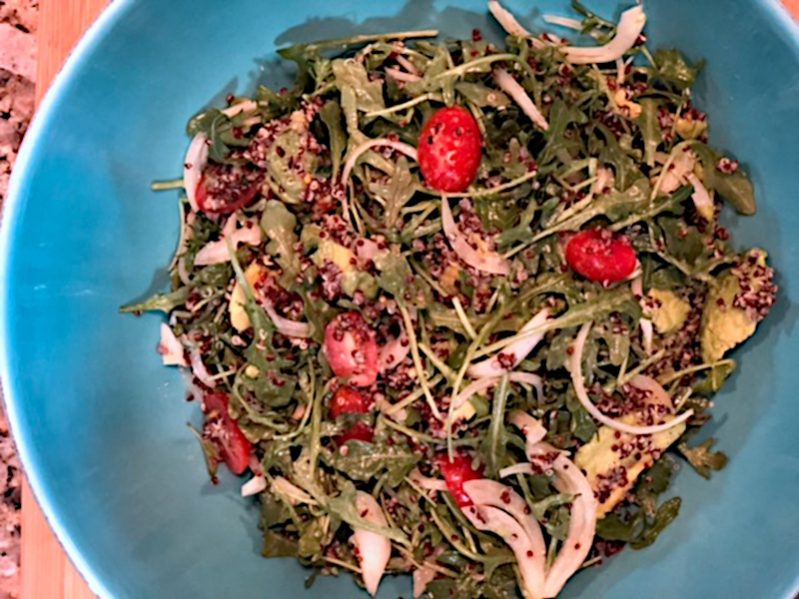 About the cook: Ronaldo describes his approach to life as he does his cooking – “Modern Techniques with Ancestral Flavors.” Ronaldo gives mas sabor to everything he does. He is an associate at DeMartino, a Cuban Restaurant in Somerville, NJ, and has partnered with Healthfirst Insurance. He is an American Heart Association National Spokesperson for the Healthy for Good campaign and also shares his knowledge with the AARP caregivers program. Above all, he is a devout husband and father.

About the dish: A wonderful blend of greens, avocados, and spices. Brings the punch, flavor, and health to the party.

Grab a large bowl that you could serve directly from. (Something nice)
To the bowl add arugula, avocados, cherry tomatoes, parsley, dill, cilantro, oregano, onion, poblano peppers, red quinoa.
To a small bowl add vegan mayonnaise, lime juice, salt to taste, pepper to taste, cumin, chipotle chili flakes. (Mix well to create dressing)
Add dressing to the walls of the bowl, mix the salad with your hand making sure all the ingredients become incorporated with the others.
Enjoy