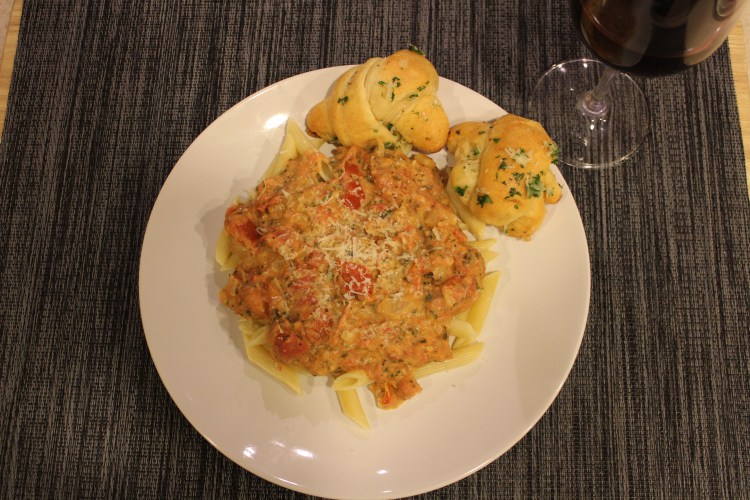 About the cook: Having spent most of my life overseas, I had the opportunity to experience many different types of food. My parents encouraged me to try sushi and balut (a Filipino delicacy- a developing bird embryo that is boiled and eaten from the shell) as a child. While I didn’t like either at the time, this made me open to the idea of new foods. Unfortunately, moving around and traveling meant that if I fell in love with a dish I had in a restaurant, the likelihood I’d ever come across that particular dish made that specific way again was pretty nonexistent. But I had a solution: I could try to recreate these dishes and I have dedicated many hours doing just that.

About the dish: When I was stationed at Langley AFB, Va, there was a place in Newport News called Little Italy. It was a hole-in-the-wall Italian restaurant with some pretty good pizza. After going a couple times, I asked the server what her favorite meal was. She swore by the Penne Alla Vodka. I had never tried it before, but I was hooked after I did!! For those who don’t know, penne alla vodka is a penne pasta dish made with tomatoes, garlic, and vodka. Variations include the above ingredients in a cream sauce, which is how it was served at Little Italy. I went almost weekly to this place and ordered it with garlic knots. Even though this place served the best penne alla vodka, it wasn’t enough to keep the restaurant in business and they have closed. It had been about 2 years since I left Virginia, and my friend Sassey posted a photo of pasta with a vodka sauce on social media. It was an instant flashback. I HAD to have penne alla vodka and garlic knots. Much to my surprise (and detrimental to my future diets), it is a cheap and easy dish to make and I usually have most of the ingredients in my kitchen.

Sauté onions and garlic in 1 TBsp olive oil and 1/2 tsp salt until the onions are translucent. Add tomatoes, parsley, oregano, 1 1/2 tsp salt, pepper, and crushed red pepper. Cover and cook on med-high heat until tomatoes are cooked down (about 15-20 mins). Add 2 TBsp of olive oil and 1/2 cup vodka to the sauce. Leave uncovered on high heat until the sauce reduces and thickens (about 10 mins). Reduce the temperature to a simmer. Add heavy cream and remainder of the vodka. Simmer for 5 mins. Serve over cooked penne.